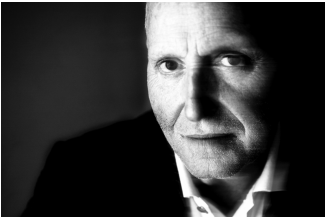 Rawlins Gilliland is a Dallas native ‘raised by 21st century artist / musician parents in the middle of the 20th century’.  His life path resume combines variants as unlikely as spending the second half of his 20's stowing away on planes internationally before becoming a National Endowment for the Arts Master Poet grant recipient or the 1990s stint as Sales Director for luxury retailer Neiman Marcus.

In this century, he has written & recorded more than a hundred personal story commentaries on National Public Radio & North Texas affiliate KERA before, in 2014, creating a series of SRO stage shows across Dallas. Rated [R]awlins at Sons of Hermann Hall May 8, 2014 & repeated at the Kessler Theater July 31, 2014 & finally a new show, also at the Kessler, ‘Happy Murder Stories’ on October 18, 2014.

[What People Are Saying]
"Rawlins Gilliland can take a simple yarn and weave it into a tapestry of imagery and humor, anticipation and surprise, with the precise language of a gifted novelist — with the added benefit that everything he says is amazingly, gloriously true. Thank god such an interesting life was entrusted to this preeminent raconteur." — Arnold Wayne Jones, The Dallas Voice

"Think about this night at the theater like you would any other one night stand. Except perhaps this time you'll have wiled away the hours with a lively, charming man you won't regret in the morning."  — Lauren Smart, The Dallas Observer

"Gilliland's knack for finding himself wrapped up in stories might be described as lucky or fortuitous, but any serendipity was a direct result of his sense of adventure. The son of activist-artists, Gilliland grew up with a sense of vivacity and he left no risk untaken."  — Lauren Smart, The Dallas Observer


"Rawlins' magnum opus proves he is a wordsmith, and an eyewitness to history. Just as David Sedaris honed his craft as a writer while working at Macy's, Rawlins Gilliland mines a wealth of material from his life in Dallas, including time spent as a top Neiman Marcus exec."  — Catherine Cuellar, Executive Director, The Dallas Arts District


"Broadway-worthy!  Rawlins Gilliland and his stories are one of a kind!" — Jim Gold, President, Neiman Marcus

Helper Bee is Sarah Jane Semrad. Photos by Can Turkyilmaz, unless otherwise noted.